The Latitude 43, built in 1932 by the architect Georges-Henri Pingusson, has been registered as a historical monument in 1992. 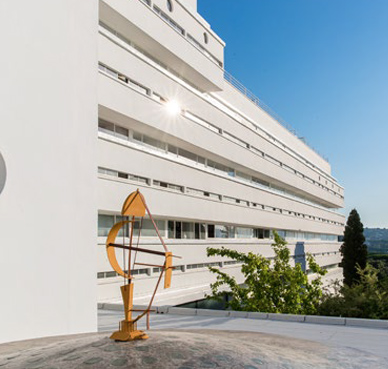 LATITUDE 43, AN ARCHITECTURAL AND
ARTISTIC SHOWCASE

The Art Deco masterpiece, enhanced by its recent renovation, has imposed itself as the show case of the works of three talented sculptors.

Seduced by the light and the Dolce Vita of the Riviera, Laurent Jardin and Charles Serruya made a stopover on the peninsula this summer at the family home of their friend Nicolas Lefebvre. In this villa, where friends, collectors and patrons meet, they set up their workshop in the heart of the garden lined with umbrella pines. A magical place, overlooking the sea, to create exceptional works of art, including those that we are presenting to you exclusively for the first time in the heart of Latitude 43, the iconic linerstyle building signed Georges Henri Pingusson (1932).

Completed in record time, it was built with the most modern material at that time : it is the biggest construction ever built with reinforced concrete. The architect also knew how to override the land constraint. Indeed, facing north towards the bay of Saint-Tropez, the building is filled with light. Pingusson imagined see-through rooms with modern and sober furniture. The Latitude 43 was a great hotel and represented a certain lifestyle. In a beautiful setting, nice facilities had been developed in order to offer a huge restaurant, an olympic-sized swimming pool, a casino and even a dance hall to wealthy people !

The Latitude experienced then a tragic fate : after four years, the hotel went bankrupt. It underwent dramatic changes and works to be occupied by the Italian and German armies. In 1944, it turned into the Americam army's headquarters and was a rest camp until 1947. In 1950, the rooms were sold as apartments. Now, the inhabitants of the building are primarily co-owners.

The building is listed by the French Historic Monument Society since 1992. It is not open to public, except during the European Heritage Days when visitors can have access to corridors.

You cannot visit the site outside the heritage event, in that case, only the galleries can be access.

►More info :
►Scroll down the page to browse our gallery and view the building and the architect work
►Follow Latitude on Facebook and stay on top of the latest news.