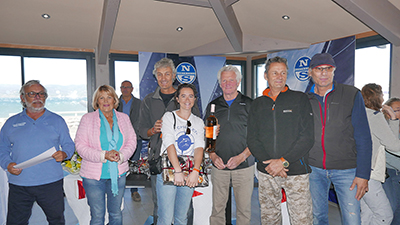 The show is over - the Mistral won.

We left around 12.00 hrs with 3 knots of easterly wind with gusts of  5! "this will be fun" said the President of the Race Committee Georges Korhel, satisfied with such conditions for a day of racing. "We managed to race in very changeable conditions with a wind that turned around and ended in the south.  The 58 sailboats in contention  completed the entire race, a course of 8 nautical miles, being two tours from Saint-Tropez to Rabiou."

On the first day, Jérôme Stubler's crew on Raving Swan finished first in real time and in his IRCB group in front of his opponents also members of Société Nautique de Saint-Tropez; Vito 2 by Gian Marco Magrini and Albator by Philippe Frantz. In IRCA, Jean-Claude Cournand's Altaïr dominated his group ahead of Macaya by Marc Pons and Kolle Carrindus by Bernard Kolle.

At this stage, nothing was certain and the classification could evolve with the following day's regatta  starting at 11am in the Gulf of Saint-Tropez. Indeed, after the evening of the competitors on  Saturday, November 11, at the Club house of Saint-Tropez, the 300 competitors were all ready to fight to win the second race.

"We were able to confirm that the Swan 42 works well in a flat calm! As the wind turned, we ended up gybing under code 0, it's quite rare! We progressed to 1 and a half knots faster than the wind ... Otherwise, it was a great day and thank you to the race committee! "

In the presence of Jeanine Serra representing the Municipality of Saint-Tropez, André Beaufils, the President of the Société Nautique de Saint-Tropez, thanked the participants, almost 60 sailing boats,  who came again this year. The North sails partners, the Vineyard of Saint-Tropez, Pommery, Suzuki Marine as well as all its team and the volunteers at sea and on land who worked so that this 21st edition went smoothly. In the company of Jean-Pierre and Mireille Epoudry, Jean-André Cherbonel of the jury, the President of the Race Committee, Georges Korhel then listed the results of a single race run the day before, Saturday, November 11.Today with the warning of gale force winds announced ,force 7 to 8, and a Mistral to boot, it was impossible to run a regatta in these conditions.Therefore, in IRCA, Jean-Claude Cournand's Altaïr won in front of Macaya by Marc Pons and Kolle Carrindus by Bernard Kolle. Jérôme Stubler's crew on Raving Swan finishes ahead of his IRCB group in front of his opponents, also members of Société Nautique de Saint-Tropez; Vito 2 by Gian Marco Magrini and Albator by Philippe Frantz.

For the HN Osiris classes, Thierry Fernandez's Mimi Team finished first in the HNA group ahead of Frédéric Rousseau's Espar II and Christophe Radais's Petrel IV. In HNB, the crew of Michael Gentle on Xanadu won first place ahead of Nutella by Max Laout and Magician by Jacques Bureau.