The Tropezien museum is devoting a year long exhibition to the great years of Johnny Hallyday in Saint-Tropez.
A popular, rock event, true to the image of the rock star. 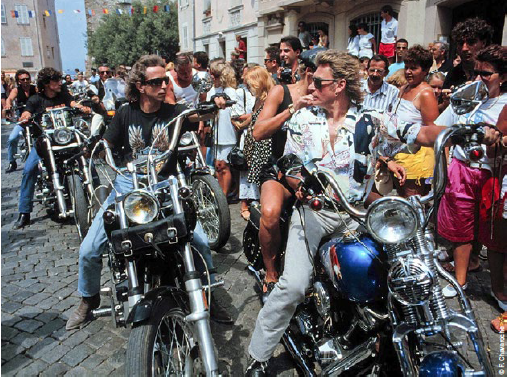 Johnny discovered Saint-Tropez in the 1960's during the Dolce Vita days! He would relax at Tahiti beach and party in the evenings, in the fashionable clubs and restaurants with his wife Sylvie and his friends Sacha Distel, Eddy Barclay, Eddy Mitchell etc... He already dreamt of owning a house in the peninsula and in 1989 his dream came true, with La Lorada, his magnificent villa in Ramatuelle.

It was in this hacienda of 700 m2 with a huge garden, that Johnny would relax after partying in the Tropezien clubs and piano bars with his friends. On July 1st 1990, Johnny Hallyday married Adeline Blondieau at the Town Hall in Ramatuelle... the couple appeared on the front page of Paris Match, on their Harley and also at the Cannes Film Festival... 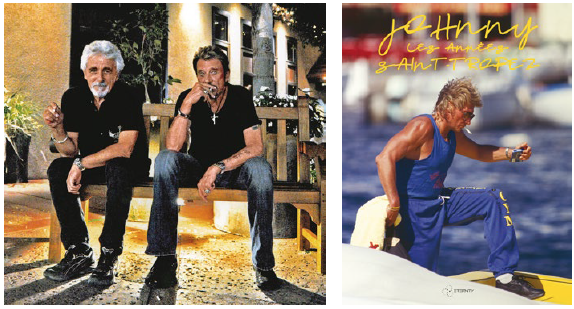 He has not been a scoop hunter since 1996, when he met Johnny, whom he followed around the world for 17 years, but the King of Paparazzi has not said his last word.

His latest masterpiece is a special edition entitled "Johnny, The Saint-Tropez Years" which made fans extremely when an exhibition dedicated to the idol was inaugurated by the Museum of the Gendarmerie and Cinema of Saint-Tropez, where it is sold exclusively. Number one of a future collection, this work was released on 15 June, to celebrate the anniversary of the disappearance of the singer.

It responds to a colossal demand on the part of the singer's fans-club, very active in France, if we judge by the hundreds of gatherings organised all over France on this occasion. It contains an image bank that is unique in the world, with about 55 million images and videos gleaned during the years spent in the wake of the artist. Daniel Angeli has all the legitimacy to be godfather of the dynamic Aix fan club "Journey in Johnny's Country", an association that brings together 7000 members. As he was part of the singer's inner circle for a long time, the photographer is always very much in demand when it comes to paying tribute to France's favourite artist. And it was another brilliant idea to compile rare, personal and intimate shots, memories of privileged moments, in a maxi format work, made with passion and respect, the famous "1943". The numbered book has became a collector's item, there is a super luxury version with its own flight case; it was renamed Buddha Book for its exceptional consistency. This object of desire, 29 kg of archives and 466 pages, has become a work of art in its own right, for collectors and some art galleries where it is displayed and sold.

"To ensure its rarity value, the production plates were deliberately destroyed" says Charlotte, one of the four children of Daniel Angeli, in charge of managing the Eternity publishing house and the Angeli Foundation which groups the rights and the whole career of the most talented image hunter of the twentieth century, who was also, for the record, the official photographer of the Cannes Film Festival, for a quarter of a century.