Inauguration  on the 28th of Septembre

A bronze sculpture sets the fascination between the Italian artist and the French icon.

The monumental sculpture was made in an atelier, in Pietrasanta, the Tuscany’s sculpture centre. This sculpture of a voluptuously-shaped and sensual woman represents naked Brigitte Bardot in a shell, like a water deity offered by the sea. The statue will be inaugurated the 28th of september, at place Blanqui, in front of the Gendarmerie and Cinema Museum. A very special tribute for an eternal and unique fiancée of Saint-Tropez.

Manara found in Brigitte Bardot, a new muse in harmony with his imagination. With this encounter began a collaboration between the artist and the actress : 25 exclusive watercolours auctioned last year in June entrusted by auctioneer Alexandre Millon from Paris. Record sale : 600 000 e. Milo Manara is at the same time a talented cartoonist, writer and illustrator. Consequently, he had nice opportunities and great collaborations during his career. After architecture and painting studies, he made his comics debut in 1969, with series of pocket books. Then, he began publishing work in several comics magazines, he directed an adaptation of Boccaccio’s Decameron, he collaborated with Hugo Pratt for acclaimed works : Indian Summer and El Gaucho. He also drew several episodes of the History of France and of the Discovery of the world in comic book in the Larousse editions. Among the collaborations, he also completed two stories working with film director Federico Fellini and illustrated the Borgia comic books written by Chilean-French film director Alejandro Jodorowsky. As a guideline, this fascination for erotic comics themes with an artistic and storytelling expression constantly inspired him and encouraged him to explore them. In 1968, for the first time, the French sculptor Aslan had succeeded in obtaining the approval of Brigitte Bardot to use her image. Each of the 25 drawings sold in auction, signed on the back, came with a seven petal daisy, emblem of the iconic actress. “He made lively drawings… We can feel the wind blowing. There is sensuality, rebellion and fun”, Brigitte Bardot said. She obviously gave her approval – for the second time in almost fifty years – to make the statue, inspired by one of Manara’s watercolours. 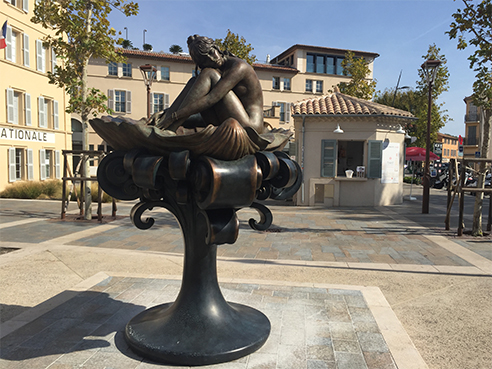