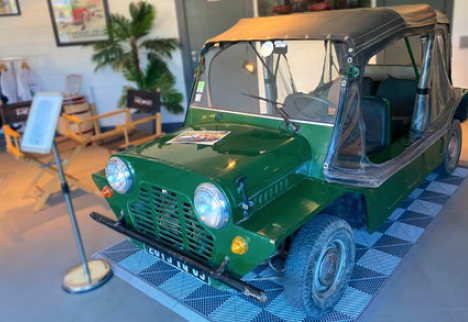 THIS COLLECTOR'S CAR IN 10 COPIES IS ALREADY AN OBJECT OF DESE When you think of Brigitte Bardot, it's hard not to associate the sex symbol of the 1960s in Saint- Tropez... but also the image of the superstar in her Mini Moke, an integral part of her image as a free and independent woman.

Thanks to the association between BB and MOKE AZUR CARS, a limited series of 10 copies signed by BB will be born. For many years, Frédéric SEREUL, CEO of the MOKE AZUR CARS , has dreamed of being able to pay tribute to Brigitte Bardot by dedicating a custom-made MOKE to her, our icon. Thanks to the support of many local actors, it will be done with only 10 signed and numbered copies available on order by the end of the year. Available in 2 colours (blue or pink), the car will be made to measure in the MOKE AZUR CARS workshops and will be equipped with noble elements in the spirit of Brigitte Bardot. The reminder of the gingham print, the vegan materials, BB's winks will be the key words of this MOKE.