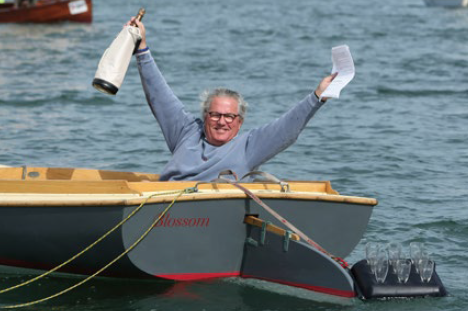 Every autumn, the great names in sailing meet
up for the Voiles de Saint-Tropez

Bruno Troublé is an international sailor, who first of all distinguished himself as a successful skipper. He took part in the Olympic Games in Mexico City, in Montreal and then in several America's Cup campaigns (skipper of France 1 then 3). In 1980, he reached the final of the challengers, the best French result in history, before creating, in 1983, the Louis Vuitton Cup, the necessary passage to confront the holder of the America's Cup, the most prestigious sailing competition in the world. Through his "Jour J" company, Bruno organises top-level sailing events. He helped Patrice de Colmont for the Nioulargue and was called in to save the Tour de France à la Voile. In Porquerolles he created "le combat des chefs", a festive event that brings together personalities from all walks of life, in a regatta on one-design boats. Bruno will sail and race on anything that floats!

Did you know?
Bruno Troublé is a man of several records, he is the only French skipper who managed, in 1980, to hoist in a tricolour boat, France 3, in the final of the America's Cup challengers, he is also the only European inducted during his lifetime (in 2007), within the prestigious "America's Cup Hall of Fame".

Why is Les Voiles de Saint-Tropez a magical nautical event?
For me, la Nioulargue (81/95) and the Voiles (99/...) are just one event that will celebrate its 40th birthday next year. I missed one or two, because of the America's Cup, which was sometimes at the same time... It's beyond a beautiful regatta, THE magical autumn event where all the sailors from different horizons meet: Vendée Globe, Fastnet, Olympics or America's Cup! This year I'll be there on the "Corinthian", a Herreshoff 17m P Class built in 1910 but it was abandoned in 1940 and has been revived 80 years later thanks to her owner Sébastien Bazin.

What is your best memory during the Voiles de Saint-Tropez?
I have many best memories! The first outing of a J class: Velsheda when it had just been summarily refurbished, the duel between Ville de Paris and Endeavour... Phocea (72m), tacking in Canoubiers bay, the parades of the Voiles, the Girelles of the Nioulargue, the duels on Thursdays, the attack on Polanski's galleon in 1986 in the port. The happiness each year of finding so many friends that we love so much but rarely see, Magic Carpet making more than 20 knots in the bay! The pleasure of a coffee on the harbour, early in the morning, in front of all the classics and the Wally!

Your three key actions to help protect the seas and the oceans?
We are all very concerned about protecting the sea... My father, already 60 years ago, never threw his cigarette butts overboard, we have been well brought up in terms of saving nature and the sea. Today we take care of the family project Tara* that my son Romain directs and that my sister Agnès partly finances. Let's hope that this dramatic world crisis of the Coronavirus will contribute to amplify the awareness and put an end even faster, to the bad habits.

* The Tara Ocean Foundation, the first foundation recognised as being of public utility dedicated to the ocean in France. A true floating scientific laboratory, the schooner Tara has already covered more than 400,000kms, calling in more than 60 countries.