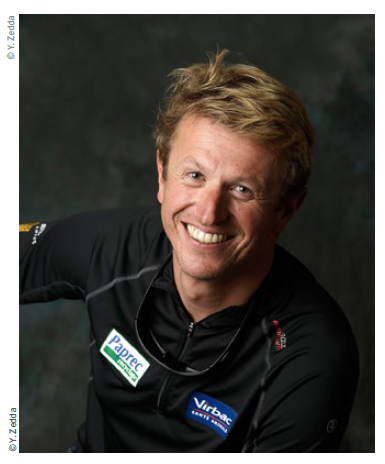 JEAN-PIERRE DICK,
THE SKIPPER OF THE GREATEST
ROUND-THE-WORLD RACES

In 2012 and 2016, the sailor from Nice made a name for himself by finishing in fourth place in the Vendée Globe, the most emblematic race of his career. His record is marked by two major victories in the Barcelona World Race with Loïck Peyron and four victories in the Transat Jacques Vabre, with Jérémie Beyou. He has also held the 24 hour sailing distance record in double-handed and single-handed monohull sailing.

Did you know?Before becoming a professional sailor, Jean-Pierre Dick was a veterinary surgeon. At the age of 36, he decided to change his life and devote himself to his passion for ocean racing and to fulfil his dream of taking part in the Vendée Globe. "I have sailed around the world six times, spending nearly half a year in the Southern Seas, and yet I have seen more large cetaceans in the Mediterranean than anywhere else! The biodiversity is still there, let's not give up hope!"

On which boat will you race in Les Voiles?
We have to respect our sea, not throw rubbish away, but pick it up... Plastic pollution is a modern disease, fighting pollution is everyone's business! When I go to sea, I collect everything I can, initiative must be encouraged.