As a charismatic aristocrat, Niki de Saint Phalle, Franco-American, was born in Neuilly-sur-Seine in 1930. This exuberant and tormented artist was also an ardent feminist. 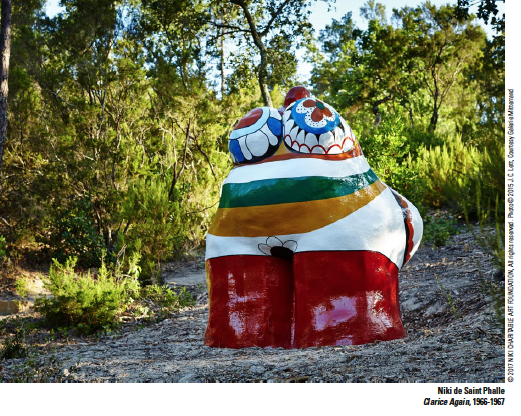 After the large retrospective dedicated to the artist at the Grand Palais in 2015, this summer, from June to October, visitors will discover five main works displayed in town. Very well-known for her popular ‘Nanas’, sculptures of voluptuously-shaped women, Niki de Saint Phalle developed a singular design aesthetic emphasized by imagination, violence and boldness. If her style was close to the Nouveau Réalisme artistic movement, very popular in the 1960’s, her creations were rather influenced by life experience, travels and encounters. Things not said and intense joyful moments were the common thread of her canvas and sculptures. A sort of artistic therapy to escape from inner demons for the artist affected by her childhood, darkened by secret traumas. “Painting calmed the chaos that was agitating my soul and provided an organic structure to my life which I was ultimately in control of.

It was a way of taming those dragons that have appeared throughout my life’s work and it helped me feel that I was in charge of my destiny. Without it, I’d rather not think about what might have happened to me”, she said (“Harry and me ; The family years 1950- 1960”, 2006). If her whole work is rather eclectic – indoor swimming pool in Saint-Tropez, habitable sculpture in the Maures hills, the “Golem” in Jerusalem, a monster with three red tongues serving as slides – it is dominated by an optimistic energy. That’s why this 1960’s icon took centre stage for a long time, in particular with her “Shots” performances or staged public “happenings” : it “gave me a great feeling”, she said. Among her major works, the monumental “Giardino dei Tarocchi” (Tarot Garden) created in Tuscany (Italy), representing the 22 major arcana found in the tarot deck of cards, to which she dedicated the last twenty years of her life. She relentlessly condemned the inequities by involving herself in causes : to fight AIDS, global warming, liberal feminism… and secretly aimed at creating a happier world ruled by women. A selfless wish that does not seem to come true…