Pastries and specialties of Saint-Tropez 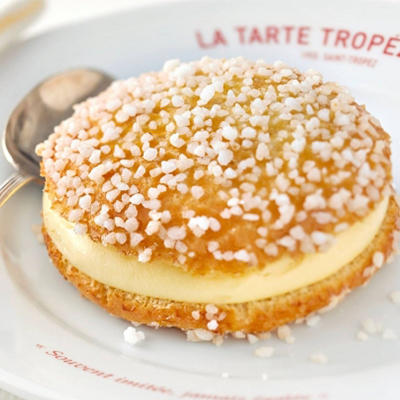 “often imitated, never equaled”, is Alexandre Micka’s motto who created the famous dessert. This dessert, whose recipe is kept secret, is a round brioche with pearl sugar and a pastry cream and buttercream filling, with a delicate flavour of orange blossom water. latartetropezienne

60 years of gourmet pleasure. Sun, memories of a vacation, sweetness… a genuine and simple enjoyment.

Alexandre Micka opened a pastry shop in 1955 on the square near the village hall. Amongst other things he sold a brioche with a cream filling inspired by a recipe of his grandmother’s, which he kept jealously secret. Not far from his pastry shop the legendary film “And God Created Woman” was being shot. During filming, the crew came to the shop often and tasted the brioche with its cream filling. This is how the gorgeous Brigitte Bardot herself came to swear by the merits Micka’s cream brioche. The first step on the road to success… and this is how the legend has began.

Often imitated, never equaled, the dessert is a round brioche with pearl sugar and a pastry cream and buttercream filling, with a delicate flavour of orange blossom water. Later on, Albert Dufrêne took over management of the company from Alexandre Micka, La Tarte Tropézienne®, registered trademark since 1973. Like his predecessor, Albert Dufrêne insisted on keeping the recipe of the dessert secret and maintained the same demanding standard of quality. To meet the demand, he expanded the store network in the Var area and in Paris (last store was opened in July 2015 in the Carrousel du Louvre).

Albert Dufrêne and his son, Sacha are working on global export of the finest Tropezian desserts including the brand-new “Baby Trop” delights to enjoy with new tantalizing flavours. 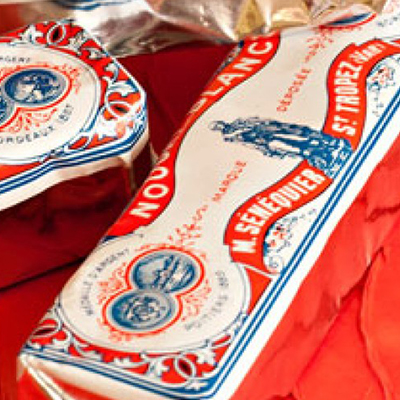 Sénéquier’s nougat made with honey and pistachios largely contributed to Sénéquier’s reputation around the world.

The Câlins de Saint-Tropez: the latest delicacy created by the Zerbone family and homemade by the confectioner Henri Roubaud with almond paste and honey with a refreshing hint of mint.

The story of Sénéquier is like a fairy tale which started in 1887, when young Marie from Saint-Tropez married Martin Sénéquier; a pastry chef from Cogolin.

They opened a pastry shop on the small Place aux Herbes which prospered on to become what it is today thanks to the soft nougat. They had two children, one of whom, Lisette married Casimir Sarraquigne. In 1930, he decided to buy some old boathouses on the port with the idea of creating there an open air café where would be served anisette and iced coffee, another specialty of Sénéquier.

After being destroyed during World War II, the café was rebuilt and redesigned with triangle-shaped red tables. For 125 years, several generations of the same family have been keeping the authenticity of the bar and turning it into the favorite stopover for artists, actors, singers or politicians. Sénéquier’s emblematic colours (red and white from the Saint-Tropez flag) never changed.

The real makeover took place in 2013 thanks to Thierry Bourdoncle, originally from the Aveyron region and owner of around 30 restaurants in France. Thanks to interior designer Richard Lafond, it has been refurbished while respecting the values of traditions and authenticity, preserving the heritage and focusing on a new modern, elegant and cozy place : old vintage mouldings, tufted sofas, soft lights. Now open all year round, Sénéquier offers a non-stop service for lunch and dinner with brasserie menu and daily specials.

The discreet and elegant Jean-Robert de La Cruz, the Sénéquier managing director, reflects on the past few months : “to modernize without changing the aspect of the premises, to remain faithful to its history and identity is still a major challenge”. Last year, it was a positive result thanks to the development of the restaurant : a new menu respecting the basics and the Sénéquier legend, focusing on the product rather than on technics in order to provide the best fresh and quality dishes. “As nougat and iced coffee have been the 2 top products for many generations of regular customers, we decided to modernize the customs and traditions of the tea room. Sénéquier has now a restaurant that is open and also offers classic dishes, vegan recipes, organic products and wines. »

Sénéquier is an unrivalled leader on the harbor thanks to the sunny terrace to enjoy from breakfast till sunset. An exclusive restaurant combining authenticity and glamour.

It has been over 1000 days since Thierry Bourdoncle took over the ownership of the famous Sénequier. A track record is needed.

The red tables formely devoted to the breakfast have been covered with white tablecloths, decorated with candles for a cozy atmosphere. Sénequier has succeeded in becoming a must in Saint-Tropez. Lunch or diner at Sénequier has now become a gastronomic evidence. Always in the same chic and cozy atmosphere, the presence on the menu of whole fish such as Saint-Pierre and the sole meunière undoubtedly satisfies the requirements of the customers.

Families and friends are constantly attracted by this friendly atmosphere. Sénequier keeps its old-fashioned charm and seduces all generations.

On the large red terrace with a Spritz or one of the many cocktails on the menu, it is natural to extend the evening enjoying a dinner in this magical universe.