To attract and even pleasantly surprise guests looking for exceptional emotions and new gourmet menus, the peninsula of Saint-Tropez comes close to French gastronomy perfection thanks to Michelin starred restaurants and creative chefs. 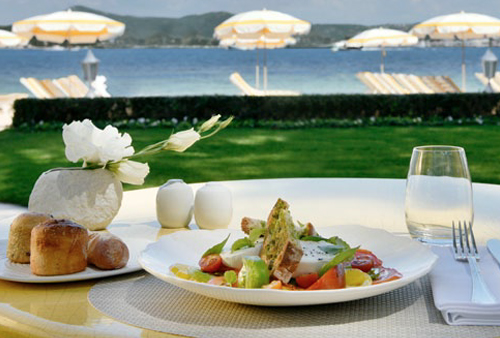 La Vague d’Or, the restaurant of La Résidence de la Pinède, is the only 3 Michelin-starred restaurant in the world located on a beach. It is also the best restaurant in the French Riviera with a score of 19.5/20 in the Gault & Millau guide. All finely orchestrated by Chef Arnaud Donckele

Breakfast in the White of Dawn Sky and sea become one, as if already saturated with light. On the terrace of La Résidence de la Pinède, a health-conscious breakfast becomes sumptuous: an egg white omelette whipped with vegetables, delicious light-as-a-cloud pancakes and recipes with cocoa butter and amaranth flour... Gastronomy and morning exercises go hand in hand. The sails are hoisted and a Mediterranean boat returns to port. It’s time to go for a swim.

►Red Sun on the Terrace and the Shade of Pine Trees at Noon
The sun blazes high in the sky and the sea turns turquoise. In the shade of the parasol pines, Chef Arnaud Donckele serves a large Mediterranean damselfish, oily fish and spiny lobster from the Gulf of Saint-Tropez, whose savoury scents intertwine with those of garden lavender. Naptime. 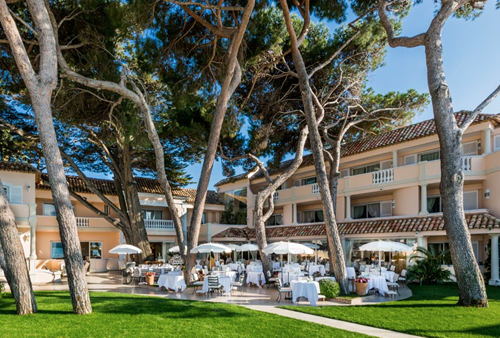 ► Golden Sand
Rest and relaxation to the sound of cicadas. The beach is calm. Craving a snack? Chef Arnaud Donckele cooks products from Provence in his own personal way, often barely letting them hit the pan. He plays with over 500 fruits and vegetables from the region, including 80 varieties of tomatoes: Cornue des Andes, tender Green Zebra, Black Russian, Pineapple, Noire de Crimée, yellow Petite Poirette, Coeur de pigeon... Not to mention the seedless Indian aubergine, as pearly as a trumpet courgette. Without exception, each one melts or cracks away under the chef’s magical touch.

► Klein Blue at Sunset at La Vague d’Or
The sun sinks into the horizon of the bay. At this hour, the sea, wavering between pink and blue, darkens and La Vague d’Or reveals all of its colours. In the kitchen, everything is ready: soon, a variation of the Tarbouriech oyster with fennel, flavoured with anise, will be served, some set in a gelée, one hot and others natural, accompanied by brioche and rye melba. Followed by ikejimeprepared fish: leerfish and tuna from Saint-Florent, caught in the Corsican waters the previous afternoon. But also zitone pasta, artichokes and black truffle. Chef Arnaud Donckele also serves lobster with chestnut honey and rosemary from Provence. As the evening progresses, the pink sky turns Klein blue and then midnight blue. The perfect moment to walk along the sea, barefoot in the cool night sand. 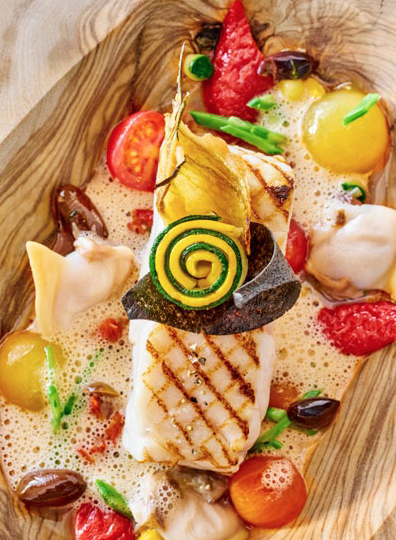 ► Black-Ink Sea Viewed from the Bar
Take the time to sip tangy sweet cocktails along the water under the starry navy blue sky. Or simply enjoy a glass of champagne while keeping an eye on the Saint-Tropez bell tower, which traditionally rings in the arrival of night and the beginning of festivities.