More than 60 years of gourmet pleasure.

... Sun, memories of a vacation, sweetness… a genuine and simple enjoyment.
Alexandre Micka opened a pastry shop in 1955 on the square near the village hall in Saint-Tropez.

Amongst other things he sold a brioche with a cream filling inspired by a recipe from his grandmother, which he kept jealously secret. Not far from his pastry shop the legendary film “And God Created Woman” was being shot. During filming, the crew came to the shop often and tasted the brioche with its cream filling. 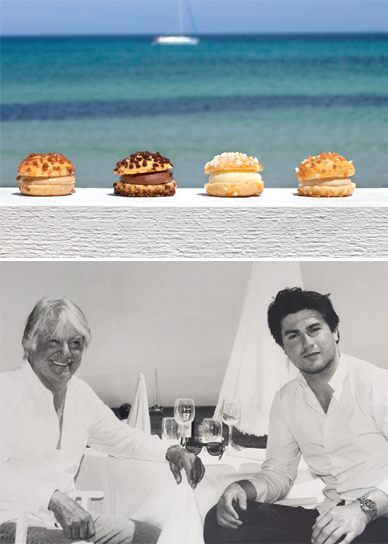 This is how the gorgeous Brigitte Bardot herself came to swear by the merits of Micka’s cream brioche. The first step on the road to success… and this is how the legend has began. Often imitated, never equalled, La Tarte Tropézienne is a unique blend of two smooth creams and a gourmet brioche sprinkled with generous grains of sugar. Later on, Albert Dufrêne took over management of the company from Alexandre Micka, La Tarte Tropézienne®, registered trademark since 1973.

Like his predecessor, Albert Dufrêne insisted on keeping the recipe of the dessert secret and maintained the same demanding standard of quality. To meet the demand, he expanded the store network in the Var area and in Paris - Saint-Germain-des-Prés.

Albert Dufrêne and his son, Sacha are working on global export of the finest Tropezian desserts including the brandnew “Baby Trop” delights to enjoy with new tantalizing flavours.