The name Saint-Tropez comes from Torpes, a roman officer under Nero’s reign. After being converted by Saint-Paul and hence provoking the emperor’s anger, he was decapitated in the year 68. 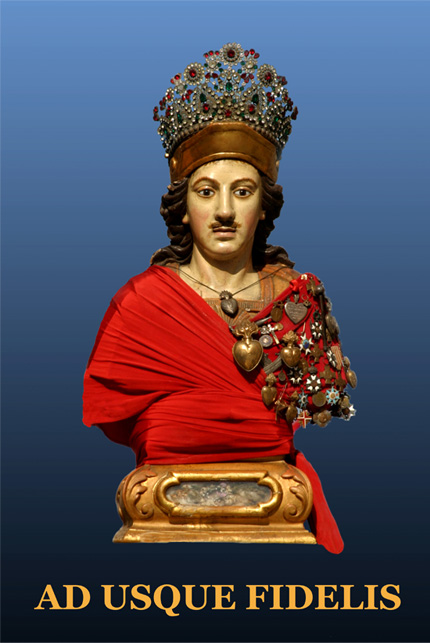 The name Saint-Tropez comes from Torpes, a roman officer under Nero’s reign. After being converted by Saint-Paul and hence provoking the emperor’s anger, he was decapitated in the year 68. His body was placed in a small boat in Pisa together with a cock and a dog. Pushed by the ligurian currents, the boat landed on the shores of Saint-Tropez. The red and white colours of Saint-Tropez’s flag are those of the former Republic of Genoa.

In 1470, the baron of Grimaud Jean de Cossa and the Genovese lord Raphaël de Garezzio  signed an agreement allowing 21 families from Genoa to settle in the village which had been destroyed and de-populated following several invasions. They rebuilt the fortifications and took charge of the region’s security. In exchange they were exempted from paying taxes. The first Bravades, which still exist to this day, celebrated the patron saint Torpes on 16, 17 and 18 May and were a homage to the Tropezians’ courage in the face of the enemy. They reflect the particular soul of the village and of its inhabitants. A deep involvement with the sea is another trait of Tropezian character. The town’s glorious military past is particularly illustrated by Pierre-André Suffren, vice-admiral of the royal armies during the XIIIth century, whose statue stands proudly on the port.
A rich maritime past, but also on land with the Citadel serving as a rampart against invasions, notably in 1652 when Tropezians showed their faithfulness during the  rebellion of the realm’s great powers against Louis XIVth. “Ad Usque Fidelis” (faithful till the end) is in fact Saint Tropez’s motto. A trend adopted by General Jean-François Allard (1785-1839), hero of Napoleon’s campaigns, who returned to Saint-Tropez, his birth place, after 16 years in India and accompanied by princess Pan Deï. They lived a happy and also a tragic life in their house at rue Gambetta, today a hotel.
During the XIXth century, the village was concentrated on ship building (a fine example being the 3 master “La Reine des Anges” built in Saint-Tropez’s yards in 1860) and also fishing. The village was discovered by painters, intellectuals and artists, such as the famed pointillist Paul Signac. Since then, thanks to illustrious visitors coming from the worlds of music, cinema and literature, Saint-Tropez’s success has been ever growing. Saint-Tropez is, and will remain, one of the most famous villages in the world.