Known as a cultural hotspot in the 30's, the castle was a must for the greatest French and international artists. The castle and its domain, abandoned until 1999, regained their prestige thanks to a complete restoration by the new owners. The quality defines all the stages of the elaboration of our wine. At Château Volterra, wine is a matter of passion, tradition and terroir. 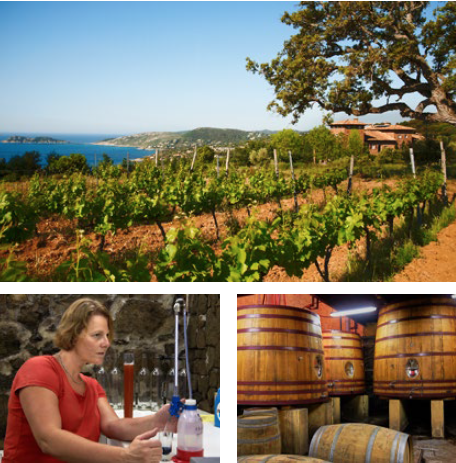 From the slopes of Cap Camarat, the imposing wineyard offers a panoramic view of the Levant islands.

It was for the love of a young girl from Ramatuelle, that an English Lord built the Château in stone with Klein blue shutters, and the private port bordered by quiet creeks. Château Volterra took 20 years to build and was completed in 1925. Léon Volterra was elected Mayor of Saint-Tropez in 1935. Before the war, Simone and Léon Volterra dominated Paris, they owned, amongst others, the Casino de Paris, the Galeries Lafayette and the Lido. They bought the huge property planted with vines and pine forests and opened it to the artists, the theatre and music hall entertainers but also to politicians and simple hunters. Many French actors and artists enjoyed this charming spot during it’s heydays, several movies were also filmed there. Today Château Volterra is synonymous with exceptional wines.

The Château is a commercial enterprise that actively participates in various actions as a member of the communities of Ramatuelle and Saint-Tropez. A variety of events are organized all summer; gastronomy and wines, wine tasting, visits of the wine cellars and, the not to be missed picnic during the grape harvesting... and much, much more. 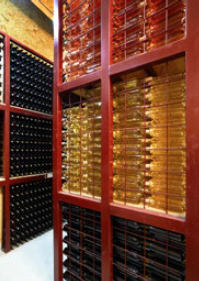 FROM VINE TO WINE

• Our vines are worked manually, without the use of weed killers.
• Yields are kept to a minimum to increase the quality of the grapes.
• The grapes are harvested at night to preserve the freshness and the particular aromas of each variety.
• A final sorting in the cellar makes it possible to select only the healthiest grains.
• All wines are bottled at the Château.

The Rosé: Grenache, Mourvèdre The first juice is used and fermented at low temperature.
Whites: Two grape varieties; two very different wines:
• Vermentino: fermented in stainless steel tanks to favor the varietal character of the grape variety: fresh and lively. • Chardonnay: fermented in barrels with aging on lees to create a rich and complex wine

• Chardonnay: fermented in barrels with aging on lees to create a rich and complex wine.

View from the Château

The Château and outside